People often don’t notice things until they aren’t done well. Things being done poorly can sometimes be the only times when people realize how important something is. Just like movie CGI or internet speeds, the importance of typography, which is what fonts of websites are categorized under, often goes unnoticed. Website fonts only really stand out for the wrong reasons when it’s poorly done.

Typography is the art and technique behind the arrangement, stylization, and use of text. It contributes greatly to any piece of content’s reading experience, but is also something that often flies completely under the radar of readers. The better the typography, such as a website using an appealing pairing of fonts or being consistently well-designed, the less we notice how well-done it is. Only when something’s typography is subpar, such as when a site has clear design inconsistencies or uses illegible fonts, do we realize how important typography and the use of fonts are in designing websites.

Understanding typography and fonts are important, but they come with vocabulary that might make learning about this important topic seem harder than it really is. This article will go over basic vocabulary that you’ll find when working with typography and online fonts. After reading this article, typography, the terms used, and why fonts matter for online content should be less confusing and make more sense to you, regardless of your prior experience with this subject.

Typography is the art and technique behind the arrangement, stylization and use of text. This is a term often used online and is important in determining your content’s reading experience. Typography is a more general term, and under it are some more terms that need to be understood before we decide what your site will look like.

The term font family is applied to a wider division of individual fonts grouped because of their common and/or similar aesthetic qualities. You can use font family and typeface interchangeably, because these two phrases both mean the same thing. The term font, on the other hand, refers to a particular font that can have its size, weight, style, and more customized in unique usage instances. What is the difference between a font and a typeface? Think of the typefaces as a musical genre, where there are differences between genre songs, but at the end of the day, separate songs are in the same genre because they have the same qualities and elements. Now think of fonts as individual songs, where each song is different, but the individual songs/fonts have similar features meaning they can be grouped together into the same genre/typeface. Although typefaces and fonts are incorrectly used interchangeably by some sources or people, keep in mind that these two terms actually refer to two different concepts in typography.

How Important Are Fonts?

Font size determines how large text will look to readers, and is usually customizable when creating websites. Font weight is what measures and decides whether a font is bolder or lighter for readers. Text stylizations are settings that cause the common visual changes you see in text, such as italics, how spaced apart the text is, and what color the text is. Text stylizations give you control over the features of individual fonts, so any font can be changed to better suit your use for it. 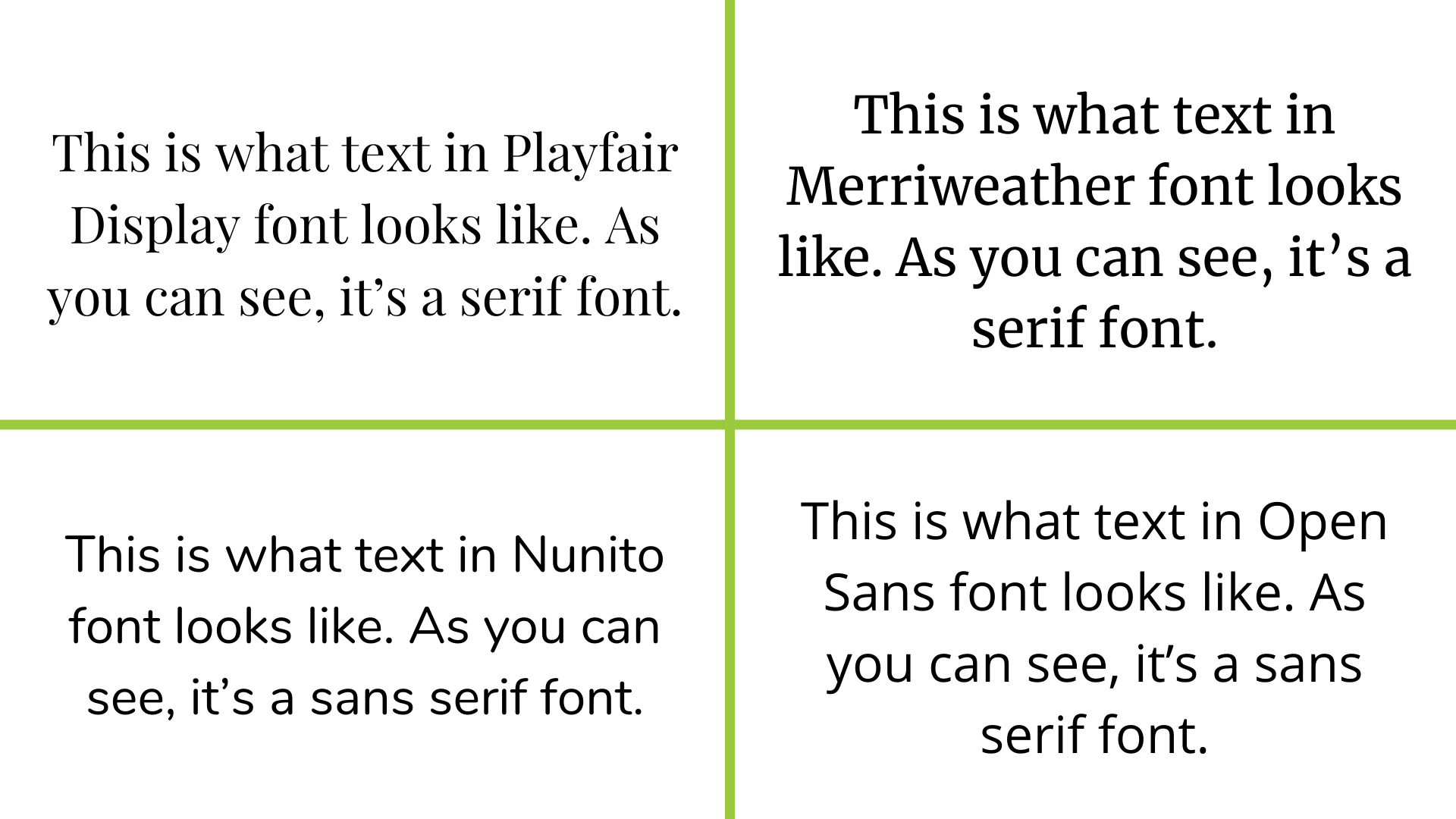 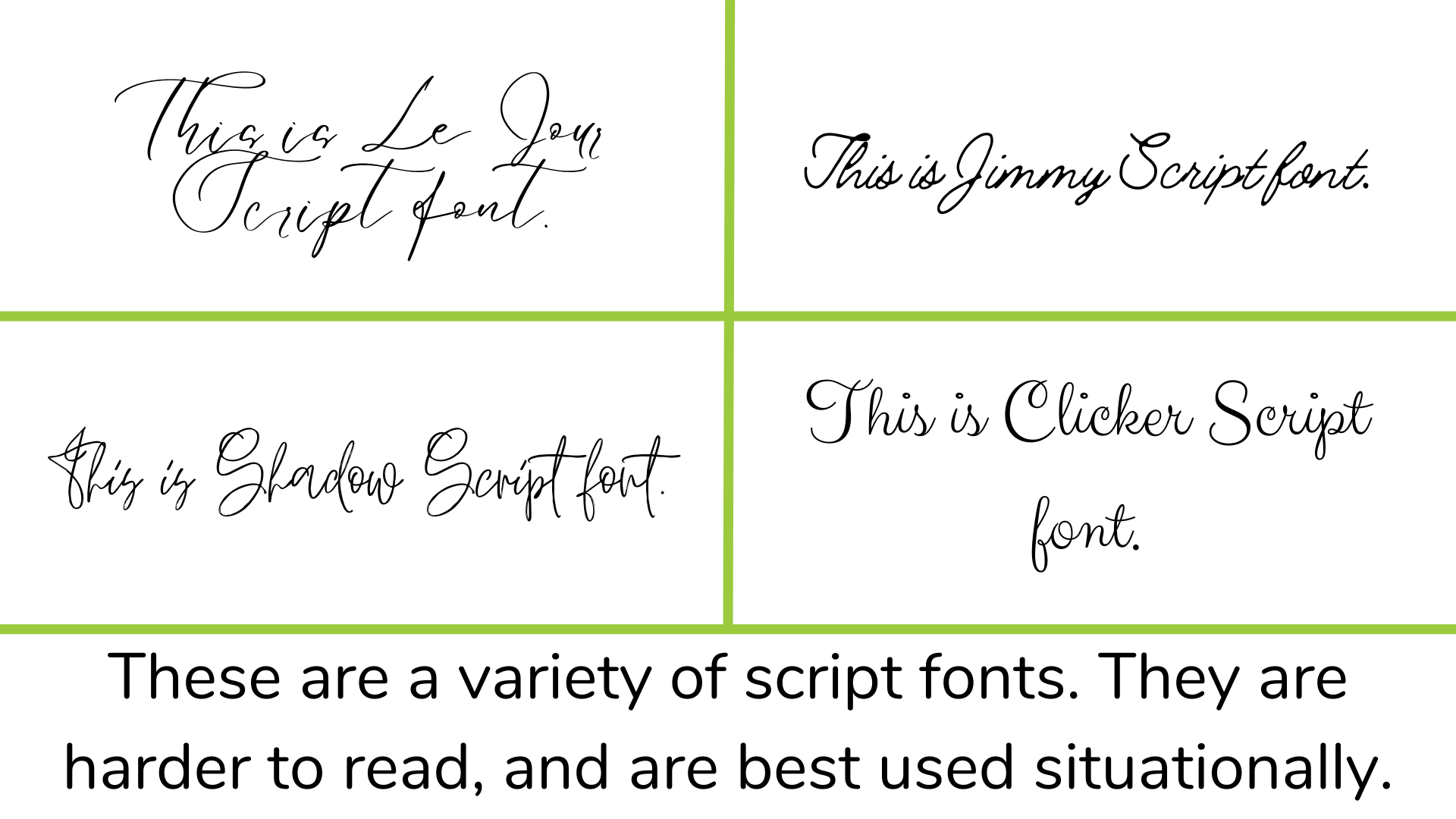 Tracking is a term used to describe the distance between all the individual letters and words when using a font. Tracking is interchangeable with the term line spacing, a term commonly used in the HTML world. It is important to present appealing tracking in your content, both in making sure things aren’t too spaced out or cramped, because strange word spacing will immediately stand out to readers in a negative way. Leading is a term used to describe the vertical distance between separate lines of text. It can be used interchangeably with the term line height that’s encountered when working with HTML. When you refer to concepts like single-spacing or double-spacing text, leading is what you’re actually referring to.

Content hierarchy is the concept of designing website elements, such as headings and text, based on which of these elements is most to least significant. Different font sizes, thicknesses, typefaces, and more can be used to build a hierarchy of content that readers and search engines alike can pick up on. As a feature present across many website creation tools, you can set hierarchies with differently-ranked titles and headings across a site page. As an example, you can set the most prominent title of your page to be Heading 1 or H1, and following headings would be designated H2 or H3 depending on their importance in the page.

In particular, Heading 1 or H1 is the key to a page’s SEO because it plays the role of indicator for a page’s title and thus its purpose. Using H1 on a page is important for search engine crawlers to find out what your content is about, and it’s often the first and most prominent thing visitors see on your page since, most of the time, H1 will be the biggest text on a screen. Effective use of H1 text is essential. Each site page must have only 1 H1-tagged title or heading, include at least one of the target keywords in the H1 tagged content, and may not use each of the target keywords more than once in the content of this label. The importance of H1 text for search engine crawlers is why you should keep these hierarchy rules in mind when designing your site’s page layout.

Fonts might not be the easiest part of website design to get used to, but hopefully after reading this article, you should be more informed and knowledgeable of how to approach typography, fonts, and keep reader appeal in mind.